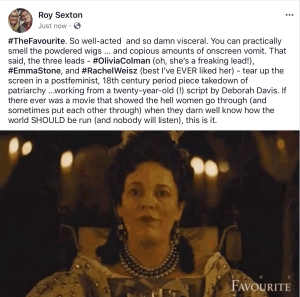 “Beware the quiet man.” – proverb that opens the film Vice

Blessed be when Hollywood gets something right, and did they ever with the one-two punch of The Favourite and Vice. In essence, these fact-based films tell two versions of the same tale: a sweet-natured autocrat (The Restoration-era’s Queen Anne and post-9/11 President George W. Bush, respectively) whose ineptitude is compensated for/manipulated by courtesans (Sarah Churchill and Abigail Hill and Dick and Lynne Cheney, also respectively) whose Machiavellian desires for power belie a self-satisfied surety that their intentions are noble (even when the outcomes are clearly suspect). 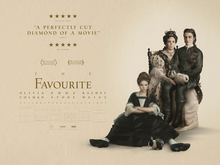 Both flicks embrace a surreal cinematic visual and aural language as well (in The Favourite, fish-eye lens cinematography, discordant musical queues, and what appears to be hip-hop choreography; in Vice, fourth-wall busting asides, Shakespearean soliloquies, and omniscient narrators) to make abundantly clear that The Favourite and Vice are intended as allegorical cautionary tales for a present-day society that has utterly run off the rails.

“The word is about, there’s something evolving; whatever may come, the world keeps revolving. They say the next big thing is here, that the revolution’s near, but to me it seems quite clear, that it’s all just a little bit of history repeating.” – Shirley Bassey and Propellerheads, “History Repeating.” 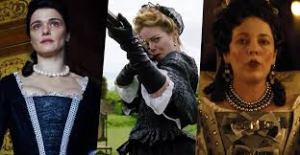 “Perfect. We’ll make a killer of you yet.” – Sarah Churchill/Lady Marlboro (Rachel Weisz) in The Favourite

The Favourite. So well-acted  and so damn visceral. You can practically smell the powdered wigs … and copious amounts of onscreen vomit. That said, the three leads – Olivia Colman (oh, she’s a freaking lead!), Emma Stone (La La Land, Birdman), and Rachel Weisz (best I’ve EVER liked her) – tear up the screen in a post-feminist, 18th-century-period-piece take-down of patriarchy …working from a twenty-year-old (!) script by Deborah Davis. If there ever was a movie that showed the hell women go through (and sometimes put each other through) when they darn well know how the world SHOULD be run (and nobody will listen), this is it.

Into this delicate spider-web wanders Marlboro’s wide-eyed cousin Abigail (Stone), whose guilelessness is as phony as the rouge on her cheeks. I won’t spoil the fun, but the wit and wisdom in the performances and in the script and the sheer lack of vanity throughout are unlike anything we’ve seen onscreen in quite a while.

And Nicholas Hoult (X-Men: First Class) holds his own with this remarkable trio as Robert Harley, a parliamentarian who finds himself the happy beneficiary of the political blow-back from this unlikeliest of love triangles.

“I’m still the lady I was. In my heart.” – Abigail Hill (Emma Stone) in The Favourite

I wasn’t a huge fan of Adam McKay’s previous biodramedy The Big Short (which just tried too damn hard and was too cute by half for my tastes), but I LOVE its follow-up Vice. A little Macbeth, a bit of Richard III, a smidge of Hee Haw, and a smattering of Mad Magazine. 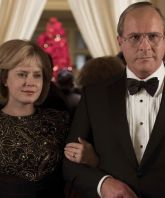 Christian Bale (American Hustle, The Dark Knight) and Amy Adams (Big Eyes, Man of Steel) are perfection as Dick and Lynne Cheney, the calculating, power-hungry duo at the center of a decades-old political machine that prizes cash over humanity. But the film is never cruel, offering a kind of grudging appreciation for the audacity of their unified if calloused accomplishment. 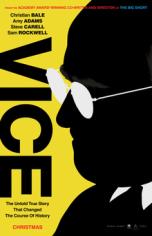 The supporting cast is pretty damn excellent as well with dynamic character turns by Sam Rockwell (Three Billboards) as George W. Bush, Steve Carell (Beautiful Boy) as Donald Rumsfeld, and Tyler Perry (Madea) as Colin Powell. The Cheney family is rounded out by American Horror Story mainstays Alison Pill and Lily Rabe as Mary and Liz Cheney. Naomi Watts (Insurgent) and Alfred Molina (The Front Runner) pop up in delightful, blink-and-you’ll-miss-them cameos as Jiminy-Cricket-esque commentators (a FOX News anchor and a snooty steakhouse waiter, respectively) on the Shakespearean intrigue that is afoot.
“I will not lie, and THAT is love.” – Sarah Churchill/Lady Marlboro (Rachel Weisz) in The Favourite

It may seem a strange recommendation to suggest that you should spend your remaining holiday free-time with such a dubious cast of characters … but you should. Both films are not only crackerjack, award-caliber entertainments, but they are essential viewing as collective warning against repeating the sins of both the distant and the immediate past. Don’t miss either film, and, if you’re truly feeling ambitious, and perhaps a bit masochistic, take them in as a double-feature. 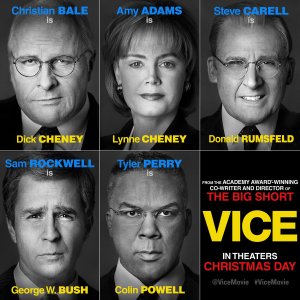