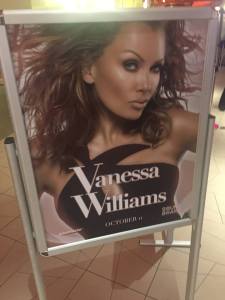 Vanessa Williams is an interesting figure in pop culture. One of the most (only?) successful (post-pageant winners) of “Miss America” … Lee Meriwether notwithstanding?

Yet, can she still be considered “Miss America” when she was de-crowned after her Penthouse pictorial scandal mid-way through her reign?

Yet, she was reinstated this year because even the “Miss America” people realized that, in this day and age of Gaga and Miley and … Trump, that maybe zapping the title of one of the few contestants to actually have a viable career (Grammy/Tony-nominations, Top 40 hit songs, a freaking Disney theme) was kinda dumb? 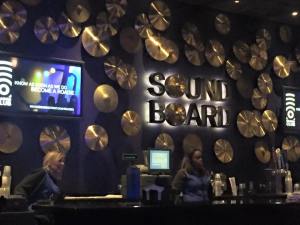 She’s had starring roles on just about every ABC dramedy of the past 15 years (e.g. Ugly Betty, Desperate Housewives), and she has become, more or less, America’s b-list sweetheart.

Heck, she even plays Alan Cumming’s love interest now on The Good Wife – that’s a pair of celebrities who unexpectedly crawled from our nation’s puritanically judgmental margins to stand triumphant in the hazy comfort-glare of middle-America’s beloved boob tube. And they play a couple (sort of). Now that is something!

So, when I got a panicky email from Ticketmaster last week, breathlessly urging me to “buy one-get one free” of her still copiously available tickets for Sunday’s performance at Motor City Casino’s “Sound Board” night club, you betcha I snapped up two.

Her show is like a comfortably chunky, still stylish, but totally retro sweater in the back of your closet. It is 90-minutes of timeless nostalgia, a little funky and a lot soothing with a smidge of regret that whatever you thought you would be doing years later and however you thought you’d be changing the world just didn’t quite happen. And that’s ok. (This may be one of my worst/most confessional metaphors ever.) 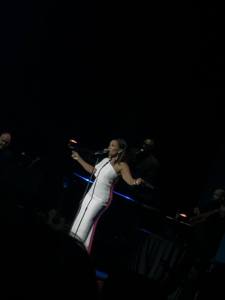 Williams was one of the stand-bys in my mix-taped 90s/00s life soundtrack: from the Teena Marie-lite blast of her debut The Right Stuff through the adult-contemporary fog of The Sweetest Days, through the edgy post-divorce Alanis-ish angst of Next through her reinvention as a Broadway Baby in Into the Woods, Kiss of the Spider Woman, and Sondheim on Sondheim, culminating in the inevitable (and kinda genius) post-relevance cover songs albums Everlasting Love and The Real Thing.

I’ve stuck by Williams, as a singer and as an actor – a performer who always embraced an underdog’s moxie and the reprobate’s swagger, from her sparkling turn in the ABC TV-adaptation of Bye Bye Birdie to the standout scenery-chewer in soapy melodrama Soul Food.

Her stage show hit all those notes, covering the hits we love and the ones we’ve forgotten: “Dreamin’,” “Love Is,” “Oh, How the Years Go By,” “Betcha Never,” “The Sweetest Days,” “Colors of the Wind,” and, of course, signature torch song “Save the Best for Last.”

Every number was delivered with smooth sophistication and aplomb, with the polish of a performer who dove into the muck, climbed out if it, and narrowly avoided a life of cruise ship dinner theatre performances (but still carries a few of those blue plate special, “so happy to be here with you fine folks” tics).

Her band is a tight jazz and R&B combo, and they have played with her for 20+ years. It shows. With two keyboardists, two guitarists, and one drummer as well as two dedicated backing vocalists and additional vocals from some of the instrumentalists, Williams received exceptional musical support. The band showed such range, from disco to blues, ballads to soul; they could do it all … gorgeously.

Martinis and Little Caesars pizza … only at Motor City Casino

She also featured back-up singer Carmen Ruby Floyd (an accomplished Broadway vet in her own right) who delivered a knock-out “Creole Love Call,” from the Broadway revue After Midnight.

Williams gave us a few carefully guarded insights into her tabloid storybook life, just teasing enough to let us know she hates her ex-husbands (still), loves her current (third), thinks her four kids are the best things she’s ever done, and really thinks Stephen Sondheim and Barbara Cook are the bees’ knees.

She did bring down the house with one joke in particular, noting that after Williams performed Oscar-winning “Colors of the Wind” at the Academy Awards, Whoopi Goldberg quipped, “I’ve been waiting for someone to tell me the color of my wind.”

The highlights for me of this stellar show? A one-two punch of Pocahontas’ “Colors of the Wind” and encore “Harvest for the World” (Isley Brothers). The lyrics for both detail, in a strikingly similar blend of the hopeful and the cynical, how this world and its resources and those inhabiting the Big Blue Marble demand an appreciation and a respect that transcend the commercial, the crass, and the opportunistic.

I know that Williams has always championed progressive causes, and I’m guessing she’s a longtime friend of Mother Earth, but from her delivery of these two numbers, I daresay she is about as “eco-friendly” and socially conscious as they come. Can’t beat a pop legend who takes the time to wring a social message or two from her back catalog of hits.

Thanks, Vanessa – come back to Motown soon, please!