Unfortunately for Robin Thicke, the son of Hollywood b-listers Alan Thicke and Gloria Loring, he is often seen as the poor man’s Justin Timberlake. He is actually as talented if not more so than JT. But none of us will ever know that, for he has been labeled a skeezy player by most of the major media.

I have enjoyed his music for about 10 or more years now, since he first came on the scene with his Fifth of Beethoven knock-off “When I Get You Alone” still rocking his dreadlocks and a skateboard. Since that time, he has graduated to three-piece suits and a full orchestra backing him up, though for us old fans in the group, he still plays that original hit … sans skateboard. 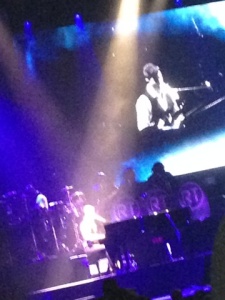 I saw him at the Fox Theatre  in Detroit, and he was a fantastic throwback to an earlier, Motown-infused era. He proved himself a marvelous multi-hyphenate musician, and he graciously acknowledged his backup band much earlier in the set than anyone I have ever seen, including digital placards of every musician who supported him. It was the epitome of a “jam session” – a notion which usually leaves me cold, but his sheer joy sold it all.

Yes, he ended the show with the uber-popular “Blurred Lines “– a song that apparently has both Camille Paglia and Gloria Steinem in apoplexy. I’m not sure it’s any more offensive than anything else on the radio these days and it’s infinitely more catchy … Marvin Gaye’s family’s lawsuit notwithstanding.

Let me add, though, that I find the video problematic myself. I am not an apologist for Mr. Thicke. I don’t know if “Blurred Lines” director Diane Martel was co-opting the insane imagery of hip-hop videos to make a satirical statement, to be provocative, or to be exploitative. I have been unclear from my first viewing of it. And some days I think Thicke shot himself in the proverbial foot with this clip. Yet, he also had a hit song because of it, as he had bubbled under for over a decade with few people paying attention to his musical talent.

I suspect he feels this conflict too since the live show had very little of that dubious (gross? misogynistic?) iconography, save the occasional Bond girl silhouette on a rear projection screen. It is a sad indictment of our culture that these kind of stunts are required to get anyone to pay attention. A Faustian bargain to be sure.

The live show was an absolute delight, filled with exceptional craft and an infectious love for Detroit. Thicke, who seems to hail from somewhere left of Malibu, knows his audience and definitely can work a crowd, cannily including covers of hits from Michael Jackson and Al Green. He proved himself an exceptional presence, while lacking a bit of Timberlake’s joie de vivre. Regardless, he held the audience enrapt for a lean and efficient 90 minute set. His opening act, DJ Cassidy offered a wonderful range of current and vintage disco and R&B that meshed nicely with Thicke’s set.

While most of the world has decided they don’t like Robin Thicke for some inexplicable reason, his talent is unimpeachable. If he swaggers his way to a venue near you, I urge you to give his show a shot. He is very talented Hollywood progeny who deserves more respect than he tends to get.

Reel Roy Reviews is now a book! Please check out this coverage from BroadwayWorld of upcoming book launch events! In addition to online ordering at Amazon or from the publisher Open Books, the book currently is being carried by Bookbound, Common Language Bookstore, and Crazy Wisdom Bookstore and Tea Room in Ann Arbor, Michigan; by Green Brain Comics in Dearborn, Michigan; and by Memory Lane Gift Shop in Columbia City, Indiana. Bookbound and Memory Lane both also have copies of Susie Duncan Sexton’s Secrets of an Old Typewriter series.

9 thoughts on “Can’t get no respect: Robin Thicke at Detroit’s Fox Theatre”