“Dying is easy, but comedy is hard” goes the old mantra, hyperbolically detailing the degree of difficulty for making an audience laugh. That said, it probably should be modified to read: “Dying is easy, comedy is hard, and farce is impossible.” Whether you love farce or not (I sorta don’t), it requires the crack timing of a Swiss clock, the physicality of a gymnast, and the rapid-fire delivery of a machine gun.

Fortunately, for those in the opening night audience of Tipping Point’s latest A Comedy of Tenors, farce is one of the company’s super powers.

The piece, a sequel to Ken Ludwig’s Lend Me A Tenor, details the chaotic hours before an operatic concert of three (maybe four) tenors in 1930s Paris. As the performance hangs in the balance from the tempestuous machinations of a set of male divas (toxic masculinity in its absurdist reality), producer Saunders (a hellzapoppin’ human stress-ball performance by company mainstay Dave Davies) flips every lever, ethical and otherwise, so that the show can go on.

As you can imagine, many doors are slammed as the cast romps about Monika Essen’s creamy-fine French Moderne set (someone be sure to reinforce all those floor joists for the duration of the run!). Costuming by Suzanne Young is period-perfect, ultra-tailored gorgeousness. And with Midwesterners trying their hands at a world’s atlas worth of dialects (high and low country Italian, Brooklynite, Russian), dialect coach Christopher Corporandy has his work cut out for him … and succeeds with “it’s a small world after all” aplomb. Able lighting and sound design, effortlessly transitioning the action from hotel suite to arena stage and back again, are provided by Neil Koivu and Julia Garlotte respectively.

The cast is on the balance terrific. As opera superstar Tito, the emotional vortex of this comic storm, Richard Marlatt is clearly having a ball, and, pun intended, never misses a note. I won’t spoil the first-act surprise, but he has to work double-time and applies a refreshing amount of nuance to differentiate the contrasting moments he has to play. He is aided and abetted by the ever-fabulous Sarab Kamoo as his long-suffering, take-no-prisoners wife Maria.

The script is more sitcom than art, and that’s just fine. The opening night audience was enrapt by the crackerjack performances. Directed with military precision by Angie Kane Ferrante (assistant direction by Mary Conley), this top-of-their-game cast elevates the material and delivers a fine and fun evening of escapist entertainment. And, heaven knows, we all could use that. A frisky holiday offering from the always exceptional Tipping Point.

Tipping Point Theatre presents Ken Ludwig’s A Comedy of Tenors Thursdays through Sundays, November 15 through December 23. Previews November 15 and 16 include talkbacks the producing artistic director James R. Kuhl and director Angie Ferrante. Tickets are $26. Senior citizens 62 and older: $2 off per ticket; groups of 15 or more: $3 off per ticket for all performances, excluding previews and opening night. This may be combined with the senior discount. All tickets are available online at http://www.TippingPointTheatre.com. 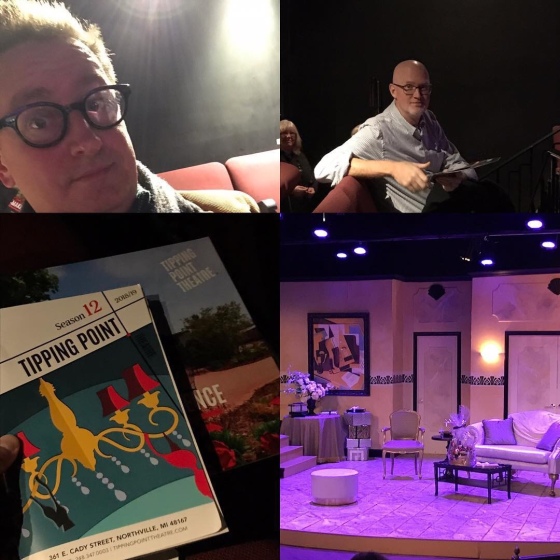 Thanks, David Liebrecht of Heartland Home Health & Hospice, for the nice shout out at the 57 minute mark here on Mark S. Lee’s “Small Talk” program. And to Brenda Zawacki Meller of Meller Marketing for alerting me! Always a fun and informative show.

5 thoughts on “A night at the opera: Tipping Point’s production of A Comedy of Tenors”