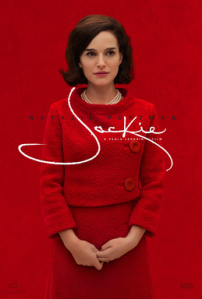 What is a real flesh-and-blood human being actually feeling in the midst of historical crisis? Forget how a history book packages the moment or how a watercolor painting inspires or what a media soundbite mythologizes or what the gossip-mongers would have us believe. What does the heart and mind actually experience when all hell is breaking loose around one, and how does that manifest in terms of integrity and leadership?

That is the central conceit of Jackie, starring Natalie Portman, about Jacqueline Bouvier Kennedy (later Onassis) and how she responded to and dealt with the assassination of her husband, quite literally in. her. lap.  This movie doesn’t make it easy on the viewer. Director Pablo Larrain traffics in visceral terrain, leaving your Hallmark Hall of Fame standard biopic in a dusty heap. Jackie Kennedy was an avowed Francophile, and the film itself has a gauzy French impressionist feel throughout, like a nauseating bad dream that folds in on itself, confounding the viewer with abstract symbolism and illuminating through eerie parallels. Even the musical score, which I found deeply affecting, has a jarring dissonance as beautiful as it is horrifying. In fact, the notes and chords used wouldn’t be out of place in your average slasher movie, and maybe that’s what Jackie actually is?

I am not much of a Natalie Portman fan – I still find Black Swan confounding, and her run as Padme Amidala (Star Wars prequels) grates to this day – but I thought she was a revelation here. Much has been said of Portman’s replication of Jackie’s clipped upper-crust accent and her affecting of the First Lady’s mannerisms and style, but what made me give forth the ugly cries during Jackie‘s first twenty minutes was the juxtaposition of nervous, guarded Jackie filming her famed White House special with shots of her on that fateful day in Dallas, scared for her life and her future, grieving her husband, and trying to find a pathway out. In a deeply impactful conceit, the director contrasts Portman (as Jackie) filming the White House special and its then-revolutionary notion of restoring the presidential domicile as a means of ensuring legacy and respect, with the abrupt and cruel murder of arguably one of the brightest lights in American politics at that time, a light that represented for many citizens great hopes for the future. I personally found the sequence devastating, although I did note that I seemed to be the only person in my Ann Arbor theater crying like a fool. (#Softie.)

From there, Portman as Jackie sits down with a hard-boiled reporter (a solemn, dubious, and engaging Billy Crudup who looks and acts more like Darren McGavin’s prettiest nephew every day) to recount the events of that fateful day and of her overall perspective on her brief stint as the First Lady. What the film drives home, more clearly than any other Kennedy biography I’ve yet viewed (and I’ve seen a lot), is the ephemeral and fleeting moment in time Jack and Jackie actually spent in Washington, D.C., and how fiercely Jackie protected what remained of their legacy after the assassination. When asked by Crudup if she displayed her children opportunistically during President Kennedy’s funeral procession to gain comfort and security through sympathy and adulation, she responds coolly, “I never wanted fame. I just became a Kennedy.”

The fiction of the film may very well be in the way Larrain positions Jackie as someone relentlessly documenting past, present, and future through an authoritarian’s view of narrative. The flick’s few humorous bits spin out of this perspective, as in the moment when Jackie, chain-smoking obsessively, notes to Crudup with firm certainty, “I don’t smoke.” An exchange like this, sardonically, is a breath of fresh air in Jackie‘s otherwise oppressive presentation.

Yet, this movie has to be oppressive.

Our society has gotten so cavalier about political rivalry and of threatening violence to those with whom we may differ philosophically. Consequently, this film becomes an essential part of our ongoing societal discourse. These deep cultural fissures in present-day America fall along many of the same socioeconomic, racial, gender, generational divides that wracked 1960s America. The ills of that decade (rampant assassinations, global conflict, violent protests) eventually became a kind of distant cultural wallpaper as time inevitably marched on. “Oh, we won’t ever be like that again,” we sighed collectively. Yet, here we are, perhaps worse than we were then; what happens if we don’t stop and think how violence and divisive rhetoric shatters families, shatters hope, and shatters our nation.

Jackie gets a bit muddled in its midsection, as narrative devices start to pile up: Jackie speaking to the reporter; Jackie speaking to a priest (the redoubtable John Hurt); Jackie chastising various cabinet members (including Attorney General and brother-in-law Bobby as played by Peter Sarsgaard who does a credible job relaying the protective anxiety of the character if not exactly nailing his look or cadences);  Jackie wandering around the White House listening to Camelot in a drunken stupor, trying on dresses and gathering up framed photographs by the armful. For some, this section will seem self-indulgent. For me, it reinforced what an inescapable nightmare this time must have been. Jackie got under my skin (in a good way), and created empathy and admiration for this woman trying to reclaim whatever power was left to her as life literally fell apart for her and for the world. Yet, even I would have trimmed about 20 minutes from the picture … and cut around three or four costume changes.

A little over a decade ago, my mother and I went to the Field Museum of Natural History in Chicago and saw the exhibit of Jackie Kennedy’s life, fashion, and historical impact. Every suit she wore was like chain mail, tightly woven, crisp, tiny, Chanel. It struck both of us – even then – what kind of world she must have been guarding against, constructing such a structured, aggressively controlled, protective bubble (clothes, decor, fashion, history, routine, rigor) around herself.  I suppose now we know the answer, and, sadly, that world has changed very little, regardless of your particular political persuasion.  Jackie Kennedy had great wit and great intelligence, and Jackie, the film, does a fine job capturing the coiled ferocity of someone who could survive such tumult and emerge on the other side an icon. I found the film upsetting and inspiring – and that is about as American as anything can be 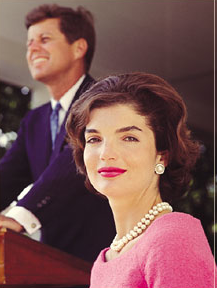