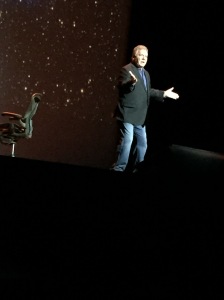 When I went to bed last night, visions of this D-level A-lister dancing around in my head, I was ready to write a snotty piece, dismissing his overeager schtick, rampant hamminess, cloddish sexism, sweaty egomania, and twitchy insecurity.

In the cold, hard light of this January day, I think, “Who am I to make fun of 84-year-old Hollywood legend William Shatner?! Granted he’s far from my favorite starship “Captain.” Patrick Stewart, Kate Mulgrew, Scott Bakula, and Chris Pine are all far ahead in that line-up.

Plus, I’ve always found Shatner a rather desperate presence, sharing the same kind of icky balsa wood machismo that plagued contemporaries like Burt Reynolds, Robert Conrad, and Lee Majors throughout the 70s and 80s. Regardless, he’s sustained an acting career across stage and screen for sixty years; he’s a best-selling author; and he’s an icon. That is something to celebrate; yet, all that “Shatnerism” gets in the way of respecting his work and always has.

I was curious to see if Shatner’s World would allay or compound that conundrum. The answer, quite honestly, is that it did both. Whereas a Star Trek alum like George Takei has revealed a comic impishness and a (more or less) refreshing layer of self-mocking irreverence in the latter years of his career, Shatner has gleefully become more bloated, arrogant, and self-mythologizing as the years have passed. He capitalized on this to greatest effect as bloviating Denny Crane in Boston Legal, but he was aided in that enterprise by co-star James Spader (who could make an avocado interesting) and to some degree by Candice Bergen (whom one could argue is kind of the female Shatner when it comes to smart aleck self-absorption). His quirky Priceline “Negotiator” persona is, for all intents and purposes, an extension of Denny with a teaspoon of mannered Kirk-isms and a healthy portion of “drunk uncle at your family reunion.”

(My favorite Shatner moment remains The Twilight Zone episode “Nightmare at 20,000 Feet” wherein his character is convinced that gremlins – which only he can see – are dismantling a plane in mid-flight. If there ever was a place for Shatner’s hyperventilating hyperbole and pop-eyed claustrophobia, it was the black-and-white world of Rod Serling.)

Shatner’s World – the show – is like a cocktail party guest who lingers about 45 minutes too long. The first hour is fun, frothy, and full of empty calories. Shatner, with his squatty shenanigans, fancies himself a raconteur – the dirty-joke-telling kind who went out of style when they retired Johnny Carson’s guest couch. For precisely sixty minutes, Shatner’s creative retelling of an upbringing with a loving, middle-class, Jewish family in Montreal is engaging. He uses slide projections, video clips, and an office chair in rather ingenious and theatrical ways to illustrate key moments (e.g. the office chair doubles as a motorcycle and a horse at various points in the show).

His sentimental, albeit self-aggrandizing, descriptions of his early days in the entertainment industry are captivating, damn funny, and, I suspect, patently false: he worked with good buddy Christopher Plummer (who knew?) at Stratford (Canada), and supposedly saved the day once as Plummer’s understudy in Henry V; he, in his estimation, single-handedly turned Broadway bomb The World of Suzie Wong into a long-running comic hit; he, according to Shatner, gave an Emmy-caliber performance in an unnamed Playhouse 90 episode until legendary co-star Lon Chaney, Jr., started rattling off stage directions as if they were dialogue; Shatner discovered the glories of leadership and horsemanship starring as Alexander the Great (!) in a film none of us had ever heard of.

Dammit. I’ve fallen into making fun of him. I said I wouldn’t. Yet, that’s part of Shatner’s studied charm. He knows you want to mock him, so he does it first, but then he twists every anecdote into a celebration of self, of the sheer force of will that has allowed him to transform marginal talent and blandly handsome features into more success and longevity than any of his detractors have or ever could achieve. It’s rather fascinating in fact – like a piece of performance art or a social experiment to which we’ve all been subjected yet remain unaware of its grand design. In this day of virulent social media and steroidal self-promotion, is Shatner any worse than the rest of us? Or was he simply our forebear? A pop culture Thomas Edison to Kim Kardashian’s Steve Jobs? 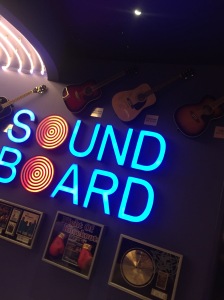 As Shatner’s World proceeds into its second hour, the focus grows more diffuse and the self-celebration harder to take. He glosses over his Star Trek years, oddly enough, dedicating as much (if not more) time to his dubious career as a recording artist. This turns out to be a canny decision, though, as it allows Shatner to end the show (and reconnect with his flagging audience) with a “song” titled “Real,” co-written with country star Brad Paisley. It’s a pretty tune (spoken word overlay notwithstanding) and offers Shatner a chance to encapsulate his raison d’etre as vainglorious underdog, aptly noting: “Just because you see me on TV doesn’t mean I’m more enlightened than you.”

It is this struggle with external perception and internal reality that brings much-needed (and sometimes head-scratching) pathos to the evening. He owns the fact that he can be a lousy husband and a half-assed father, sharing anecdotes that are equal parts aspiration and humiliation – a little Father Knows Best, a little Honeymooners, and a little War of the Roses. He acknowledges that he isn’t always beloved by his co-stars, with a riotous bit where he allows Takei to call Shatner a sh*t while simultaneously suggesting Takei might not be all the sweetness and light he wants us to believe. Brilliant. He isn’t afraid to show us his infamous struggles with money either, the kind of struggles that led him back to Star Trek (films) in the 70s (when sci fi nostalgia wasn’t the sure thing it is today), to an endless stream of comic book convention appearances, and to doing casino gigs like the very one witnessed at SoundBoard last night.

Finally, the aspect of Shatner’s life that surprised and troubled me most was (is) Shatner’s adoration of animals. Complete shock to me. Images of Shatner with his beloved dogs, horses, and other creatures fill his slide show and his repartee, and the joy in his eyes is palpable. He speaks meaningfully about the special language and kinship one can only feel with and for animals and how they can tell us all we need to know if we’d only listen. Yet, he then talks about how he “studs” his prize pets (equine and canine) to this day, going into great detail about all the awards he’s received and money he has made from the practice. He also relays a lengthy anecdote about the “horse of a lifetime” – his spirit animal, if you will – whose existence he ruined by breeding, the creature consigned to unending days of isolation and misery as a result. Shatner seems to indicate deep regret, and he expresses hope that the horse, in his final moments, forgave Shatner; but he follows this heartbreaking moment by regaling us with tales of the horse’s award-winning progeny.

Is Shatner looking for redemption or rationalization? This horse tale is arguably the most unintentionally revealing moment in the evening. A sensitive and empathic soul may lurk beneath all that Shatner bravado, but he is so preoccupied by a maddeningly retro belief in what he thinks we expect of masculinity that he can’t quite let that soul breathe and evolve and teach. He wants to embrace his mistakes, but he is too afraid that those mistakes, if authentically understood, will make him less compelling. It’s a shame. Those mistakes make him more compelling. Maybe when he’s 94 years old, we’ll get that show. He’ll still be going strong, kept aloft by a self-sustaining gale of monomania.