Yes, I’m an adult (sort of) who reads (and enjoys) comic books. I’ve always relished the escapist interludes comics frequently provide. But sometimes they are transcendant.

Add The Other History of the DC Universe to that storied (pun intended) list. Oscar-winning 12 Years a Slave screenwriter John Ridley pens a compelling, heartrending, corrosive yet loving treatment of the history of the DC Universe from the eyes of heroes of color left in the (literal) margins. Giuseppe Camuncoli and Andrea Cucchi provide gorgeous illustrations that are expansive, exhilarating, and somehow both retro AND forward-leaning.

In the first issue, Jefferson Pierce AKA Black Lightning takes us from 1972 through 1995, juxtaposing “real” world and “DC Comics’ world” events of that era with an incisive point-of-view that is eye-opening, transformative, damning, beautiful, and human. You might never look at Superman the same way again, yet you are even more appreciative of these characters and their ability to reflect our own ever-evolving societal perspectives on equality, fair play, and inclusion. Can’t wait to read the rest.

More on the series here: https://ew.com/books/john-ridley-the-other-history-of-the-dc-universe/

Want to join me in supporting a good cause? For my birthday this month (December 28 to be exact!), I’m raising money for Ronald McDonald House Charities Ann Arbor and your contribution will make an impact, whether you donate $5 or $500. Just click donate on this fundraising page: https://lnkd.in/eQ_NVZD

I’m a proud board member and have seen firsthand how every little bit helps. This little fundraiser is nearing the two thousand dollar mark because of wonderful support from kind and generous friends like you!

Thank you for your support.

Legal Marketing Coffee Talk is back Monday with host Roy Sexton (ME!), Director of Marketing at Clark Hill, and guest Stephanie D. Preston, PhD and professor of psychology at the University of Michigan. Dr. Preston examines how the brain evolved to use emotions to influence decisions across species, particularly in interpersonal and investment contexts.

How does this apply to legal marketing!?

Well, Dr. Preston focuses her attention on our desires and how our neural processes that originally evolved to guide mammals toward resources that are necessary but scarce may mislead us in our current modern conditions of material abundance. In other words, she will help us understand how our brains work. She will also explain to us the interesting connection between marketing and psychology and how their connection has led to overconsumption in some areas.

Legal Marketing Coffee Talk is brought to you by By Aries and Kates Media. 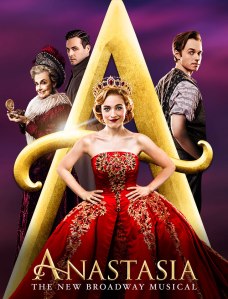 I’ve got a history with Anastasia. My mother and I saw the animated film in theatres in 1997, past the age of so-called social acceptability for a mother and son to go see an animated “princess musical.” Furthermore, we were both ugly crying within 15 minutes of the film’s opening, overtaken by the lush poignancy of Stephen Flaherty and Lynn Ahrens’ Broadway-ready score. Admittedly, we had been through about 15+ years of Faulknerian extended-family drama at that point, so we might have been raw nerves primed to lose our sh*t as an amnesiac Anastasia revisits the literal ghosts of her Romanov family past to the haunting strains of “Once Upon a December” as vocalized by the incomparable Liz Callaway.

A few months later, I decided to stage these bizarre, self-indulgent one-man cabarets on the campus of Wabash College (my alma mater where I was working as a development officer) and included both “Once Upon a December” and “Journey to the Past” among my selections, using other people’s lyrics to express my late 20s existential angst.

I also recall that my mother and I both thought the animated film – 20th Century Fox’ answer to Disney’s nouveau blockbuster classics like Beauty and the Beast and The Little Mermaid – lost its way narratively when it turned master manipulator Rasputin into a nausea-inducing Maleficent knock-off with a comic relief sidekick bat Bartok, who would go on to star in his own series of wacky straight-to-video films. I’m not sure anyone would have predicted the Russian revolution and the tragic gunning down of the entire Romanov royal clan would eventually lead to a pile of Bartok the Magnificent DVDs in a Wal-Mart clearance bin one day. Ah, capitalism wins after all.

So, it was with a giddy heart and a heaping helping of trepidation that I entered Broadway’s Broadhurst Theatre on Wednesday evening, September 26, to view the Broadway hit reinvention of Anastasia. (Please note, the last – and only other – time I saw a show on Broadway was when I attended, alongside Frances Sternhagen’s daughter Sarah Carlin, Paul Simon’s legendary flop The Capeman. And, other than the company I kept, that show sucked.)

I’m happy to report that someone somewhere must have overheard that conversation my mother and I had 20 years ago (kidding!) and jettisoned the lousy script from the animated film and gave playwright Terrence McNally carte blanche to build a new narrative around the fantastic score. New songs have been added obvi – how else can they justify ticket prices starting at $160?! And the production values are absolutely to. die. for.

Costuming by Linda Cho is music box exquisite, and Alexander Dodge’s scenic design integrating flawlessly with Aaron Rhyne’s photo-realistic projection design is a gobsmacking wonder. I don’t know how they will tour this, but between the turntable at center-stage, the rotating flats of arches that outline everything from the Russian royal palace to communist bloc headquarters to Parisian nightclubs, and the breathtaking video projections that immerse the audience in a thrill-a-minute train ride or sweeping hillside vistas, I was in awe.

Surrounded as I was by a sea of late-20-something women (all of whom were likely the little girls seated beside my mother and me when we saw the animated film), I stuck out like a sore thumb in the audience. And I didn’t care.

In its bumpy opening moments, the show seems JUST a touch theme-parkish, and it probably didn’t help that the woman playing Anastasia’s queen mother kept tripping over the hem of her Swarovski-crystal encrusted gown … and looking REALLY annoyed every time she did so. We are introduced to Anastasia as a child and the sumptuous excess of the Romanov family in a ballroom scene that is about as exciting as watching paint dry.

However, with a flick of digital magic and some ominous lighting cues, we are informed that the Romanov family has been summarily executed (hey, that’s a fun start to a family musical … if it worked for Bambi, I guess) and the littlest princess Anastasia may or may not have been killed alongside them. I must admit I wasn’t sure how they were going to pull that off. It’s kind of an important piece of set up. They did so tastefully and artistically and substantively, signaling straight away that there would be no singing and dancing bats in this interpretation.

We are then introduced to the adult Anastasia, now going by Anya, who seems to remember none of her upbringing. Unlike the animated film, doubt is placed in the audience’s minds whether or not she, in fact, is the grown-up Anastasia, though she sure does remember a lot of unusual details.

Christy Altomare is a crackerjack Anya, delivering the hit songs with aplomb but adding a contemporary agency to the character that is utterly refreshing. Whether or not Anya is a royal, she suffers no fools gladly. Borrowing liberally from the 1956 classic film starring Ingrid Bergman and Yul Brynner, McNally sets up a narrative where Anya/Anastasia must escape Russia and journey to Paris to meet her surviving grandmother the Dowager Empress (a luminous Jennifer Smith, filling in for Judy Kaye in our performance) to prove her lineage.

She is aided and abetted by a couple of well-intentioned scalawags Dmitry (dreamy, zippy Zach Adkins whose soaring voice rattles the rafters) and Vlad (Broadway vet John Bolton whose confident ease and crack comic timing nearly carry the show). Of course, initially this duo is only interested in collecting reward money for “finding” Anastasia. In fact, they have set up a casting call to try and coach any young street urchin into the role. It’s like My Fair Lady-meets-American Idol. However, when they start to realize little Anya may in fact be the real deal (clue: remember that music box in the animated film? … it plays an equally important – and merchandisable – a role here), their common decency starts to shine through.

Narrative complications are provided not by an evil immortal magician who can remove his head at will (no Rasputin … yay!), but by a society in turmoil as the Soviet government wants nothing more than to squelch the Romanov legend and give power to the people. (Watching a show about how nutty Russians can be was … odd … in this current political climate, I must admit.) Max Von Essen (Tony nominee for An American in Paris) turns in a solid performance as conflicted military bureacrat Gleb (think Les Miserables‘ Javert without all the scenery chewing) whose hunt for Anya/Anastasia propels our heroes forward.

Once Anya, Dmitry, and Vlad reach Paris in the show’s second act, Anastasia truly comes alive. The stakes are raised. There is a magnificent scene at the ballet where Anya and her grandmother circle one another to the backdrop of Swan Lake (think The King and I‘s “The Small House of Uncle Thomas”). And we are introduced to the Dowager Empress’ lady-in-waiting Countess Lily, who has a sordid past with Vlad. NewsRadio‘s Vicki Lewis normally plays Lily, but we were treated to understudy Janet Dickinson … and she was a MARVEL. The perfect blend of Madeline Kahn and Christine Ebersole. Lily’s role could be a thankless one in lesser hands. She’s pretty much saddled with expository responsibilities. Dickinson turned her two numbers “Land of Yesterday” and “The Countess and the Common Man” into absolute show-stopping barnstormers. If only the entire ensemble had her fire. I’d love to see this woman headline a show ASAP.

That said, on the balance Anastasia is a glittering gem of a musical, heartfelt and transporting with important messages about individuality, compassion, and family in all its forms. Unlike the animated film, the stage show fully embraces the historical underpinnings without losing the escapist fantasy of someone realizing that they just might be royalty. However, this is no rescue-the-princess throwback. Anastasia and the women surrounding her challenge the status quo, call the shots, and do their level best to overcome a world stacked against them. One step at a time. One hope, then another. 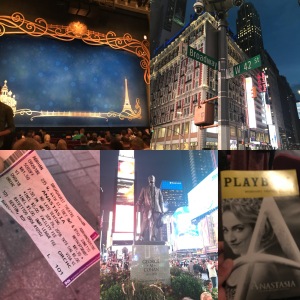 Anastasia is currently running at the Broadhurst Theatre. I bought my ticket for 50% off at TKTS. The musical is also launching its national tour. Don’t miss it.