The Penny Seats return to the stage this October with the musical revue Tomfoolery, celebrating the words and music of satirist, mathematician, and cult favorite, Tom Lehrer. The production also includes an opening short—a 5-minute mini-musical called Volcanoes!!—composed by Ann Arbor’s Zach London, who cites Lehrer as an early inspiration.

Generation X knows Lehrer best as having written the songs for Electric Company (“Silent E”), but he also wrote a number of satirical songs in the 50s and 60s for shows like That Was The Week That Was, The Frost Report, and The Steve Allen Show as well as his own concerts.

Lehrer observed, “I know it’s very bad form to quote one’s own reviews, but there is something the New York Times said about me [in 1958], that I have always treasured: ‘Mr. Lehrer’s muse [is] not fettered by such inhibiting factors as taste.’“

Tomfoolery will run on Thursdays, October 2, 9, 16 and 23, at Conor O’Neill’s Irish Pub and Restaurant, 318 South Main Street, Ann Arbor. The two companies are partnering to offer a cabaret-style show, with dinner seatings available starting at 6:30 pm, and performances each night at 8:00pm. Audience members can purchase tickets for the dinner-and-show package for just $20, or for the show only, for $10. Advance tickets (which are encouraged) are available online at pennyseats.org or by phone at (734) 926-5346.

Victoria Gilbert (of Ypsilanti) oversees choreography, and Stephen Hankes (of Ann Arbor) designed the set and will stage manage the show.

Lauren says of the piece, “This show is a guilty pleasure for us. It’s pure, brash, silliness, presented with gusto in a bar setting. So many of us remember Tom Lehrer’s acerbic, satirical songs from our childhood (Electric Company, “Poisoning Pigeons in the Park,” “Pollution”). In particular, we recall that feeling of not knowing whether our parents would approve, but presuming the worst. We snuck around, giggling and singing these songs to each other eagerly, reveling in their mischievousness; it’s wonderful to celebrate them loudly now, in all their glory. And Zach’s short piece, Volcanoes!!, is a fitting opener. It pays homage to Lehrer in its tone and staging, and will, I think, get patrons in the right frame of mind for the evening.”

Wanna Go Back to Dixie 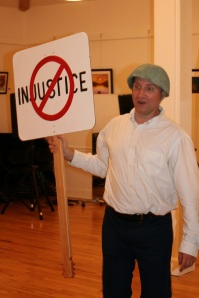 The company is also thrilled to partner with Conor O’Neill’s, a cornerstone of Ann Arbor’s downtown scene. “Conor’s has been a delight to work with,” says Lauren. “We’re thrilled at the support they’ve given us at every stage, and can’t thank them enough. It’s gratifying to be able to offer theatre patrons the incredible food, personalized service, and value that make Conor’s such a satisfying place. We can’t wait.”

The show continues a successful 2014 season for The Penny Seats, who presented an acclaimed production of Elektra this July in West Park. The group is now in its fourth year of operation and continues to be overseen by a volunteer staff from the Ann Arbor area. (Later, The Penny Seats will re-team with 826 Michigan for their annual Five Bowls of Oatmeal performance, featuring short plays written by local schoolchildren in the Ann Arbor and Ypsilanti area.)