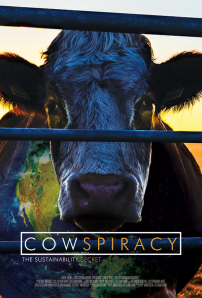 God love people like John Mola and Susie Duncan Sexton and Kim Elizabeth Johnson. If it weren’t for folks like them, I’d have no social conscience at all. The former two (John and Susie) supply me with the information and the education on how poorly we treat this planet and all of its inhabitants, and the latter (Kim) keeps me informed about similarly-themed events here in Southeast Michigan (though I have been plenty remiss in availing myself of all the opportunities).

And all three set a fabulous example for sustainable living, kind diets, and compassionate hearts.

Last night, per Kim’s invitation, I went to Royal Oak’s Main Art Theatre for a special presentation (benefiting wonderful VegMichigan) of the film Cowspiracy. Yes, you read that title correctly. Cowspiracy. What is this documentary about? Well, in short, it’s about how willfully reckless we all are with this planet’s future in our rampant (some might say rabid) consumption of animal products (meat, dairy, eggs, etc.).

The documentary filmmakers posit that most of us could give one whit about the environmental impact the food we eat creates. We have been conditioned to see our food as simply a commodity – disassociated from its source (i.e. living beings like you and me) – by culture, family, big-ag industries, grocery stores, and even our own environmental action groups.

(Shame on you, Sierra Club! Bunch of well-scrubbed yuppies bedecked in Ralph Lauren plaids and denims who fancy themselves latter day Ansel Adamses for whom mountain ranges hold more appeal than living beings. Yeah, I said it. What strikes you in watching these talking heads is just how self-satisfied and out. of. touch. they really are.)

The film in its casual, loping, conversational style visits all quadrants of the food industry, from factory farming to lobbying groups, from so-called “humane” organic ranches to various environmental action groups. Cowspiracy‘s central thesis is that there is no sector – not energy, not manufacturing – that is having a larger negative impact on the environment (e.g. greenhouse gasses, pollution, global warming, deforestation) than meat/dairy/poultry/fish. Nor is there an industry more in denial – malicious or otherwise – about said impact.

Let me add that I’ve been a vegetarian for nearly four years now, and after seeing tonight’s film I’m likely to go full vegan. Yes, I love animals, and, yes, some of the aforementioned family members helped pave the way for me. However, the tipping point as captured in this film is that this “industry” is not only supplying us with a food product we don’t actually need (and is quite unhealthy for us) but is destroying the planet in the process.

The land and resources (and, yes, lives) gobbled up to create one (gross) Big Mac is mind-numbing. You, like some of the interviewees in this film, may chalk that up to some hippie dippy mentality. But if you give this film a chance, it gives a logical argument to why we all need to eat much differently…or we’ll find ourselves floating down the street in our useless leather-seated SUVs when the polar ice caps finally evaporate.

Limiting oneself to dairy or eggs or fish and eliminating red meat, pork, or poultry just doesn’t cut it. The carbon impact of these “foods” on the environment is, well, ridiculous. The amount of grains and beans produced to feed animals that we, in turn, consume is, as they say, a “false economy. ” The film is not a polemic. You won’t feel chastised watching it (unlike how you probably feel reading this review) but you will be entertained and enlightened, and, well, you’re gonna laugh … a lot.

What this film does so very well is humanize the impact that animal products have on our economy and our environment. Our guide in the film, Kip Andersen (also the film’s director and co-producer), looks like he took a left turn out of Ann Arbor’s SkatePark and, whoa, decided to make a moooovie, man. And he is perfect. Clearly a sensitive soul, Andersen has been deeply impacted by Al Gore’s seminal An Inconvenient Truth, but, through the course of Cowspiracy which builds on the foundation laid in Gore’s documentary, our eyes are opened as Andersen’s eyes are opened, discovering truths even too inconvenient for Mr. Gore.

Anyone who has ever watched a Frank Capra movie (or, hell, a Martin Scorsese one) knows that people don’t like change. Don’t mess with my family, my food, my culture … but when those life choices are destroying us all, a change is long overdue. That’s the epiphany Andersen has during the course of this film.

There is a very real and frightening issue bearing down on all of us, namely that our rampant consumption of meat is unsustainable. Yes, for animal lovers like myself that is a no-brainer. Eat more carrots. But the carbon footprint of meat production is destroying this planet. Cowspiracy does a beautiful job without being ham-handed (no pun intended) or overbearing, illustrating the very practical impracticality of turning all that grain into a nasty fast-food burger.

If you give this film a chance, you will be highly entertained. It’s a breezy 90-plus minutes, and the movie is making its way to festivals around the country and hopefully soon will be available on home video and via streaming. Dare we not ask the question, the intimate question, of how what we eat affects not only ourselves but the entire world around us? 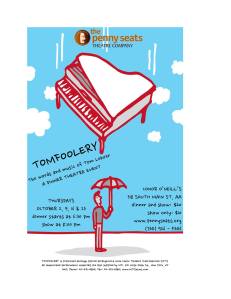